If you count all the little nuts, bolts, loose wrenches and pieces of demolished satellites as satellites, then there’s a whole lot of junk floating around Earth. Thousands of pieces that pose a hazard.

Around the moon we have about three functioning spacecraft but have launched far more than that that have, over time, gone dead – perhaps crashed to the surface of the moon. Then we have the odd Juno spacecraft around Jupiter, the voyagers I and II and so on. We’ve put more space junk up there then anything else. This is a fairly accurate artist’s rendition of space junk around Earth.

The Russians have put several probes on Venus, the Americans and Europeans put a probe on Titan, we have probes on Mars, we flew a probe by Pluto and orbited Saturn for a long while before crashing deliberately. We presently have, as mentioned, the Juno spacecraft around Jupiter. We have hundreds of functioning satellites in orbit around Earth.

We spend 600 billion dollars every year on the military. What would happen if NASA had that kind of money? Here’s a very cool YouTube video that I love to watch!
[youtube https://www.youtube.com/watch?v=chLOgj8xjx8&w=854&h=480]

There is no stigma. All of science is dedicated to discover extraterrestrial life. We would be completely excited to find even a fossil of a microbe from space because it would be the ultimate affirmation that life can evolve from matter on another world other than Earth. Our best hope at present is to find some kind of life on one of the moons of Jupiter or Saturn, or perhaps some fossils on Mars as of yet undiscovered. We are even spending billions of dollars with the SETI program to listen for radio waves from space!

However, much to the surprise and dismay of scientists, we have yet to discover anything at all. 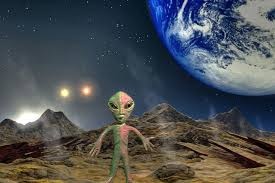