Wouldn’t it be great to travel at Warp speed?

The answer to your question, surprisingly enough, is not necessarily “No, humans will never invent a way to travel through space fast enough to reach far away galaxies.”

Here’s the deal. The faster you go, the slower you age, so if you could go almost the speed of light, then it would still take you millions or billions of years to fly to other galaxies from Earth’s point of view, but not so for you who are traveling in the spacecraft. For you the time would be dilated.

Look at an example introduced by Albert Einstein. Consider two twins, named Biff and Cliff. On their 20th birthday, Biff decides to get in a spaceship and take off into outer space, traveling at nearly the speed of light.

He journeys around the cosmos at this speed for about 5 years, returning to the Earth when he is 25 years old.

Cliff, on the other hand, remains on the Earth. When Biff returns, it turns out that Cliff is 95 years old.

Similarly, Biff could travel to other stars and galaxies if he could somehow go fast enough, but meanwhile whole civilizations, humanity and even Earth itself would grow old and cease to exist. So when Biff gets there, Cliff will be long gone. Biff will have traveled forward in time as his spaceship zipped through the cosmos.

Although I wrote a time travel novel once (Time Gods), time travel has many problems that most sci-fi authors don’t take into consideration.

For example, consider that Earth spins at the equator at about a thousand miles per hour and the Earth orbits around the sun an average speed of 29.8km/s or 65,000 mph (105,000 kph).

The Milky Way galaxy is moving toward the Andromeda Galaxy at about 2.1 million kilometers per hour, or 1.305 million miles per hour.

Now, get in a time machine and go forward (or backwards) an hour or so. Will you find yourself in the same place on Earth only in a different time, or will you find yourself floating in space, Earth having moved hundreds of thousands of miles away in the short period of your time travel?

Now wouldn’t that make an interesting idea for a time travel novel!

Aside from that, and disregarding the impracticality of string theory, time travel in reverse isn’t possible, but time travel to the future certainly is possible under special circumstances.

Consider that you have an identical twin and both of you are in a space ship orbiting a black hole. On your birthday, your twin sibling decides he wants to get in a shuttle craft and take a closer look at the event horizon of the black hole. So he gets inside the craft and travels near the event horizon and then comes back 20 minutes later, only to find you are a very old person and that you have aged many, many years. What you see, as your twin gets closer to the event horizon, is that he slows down until he is practically motionless. Years go by and you grow old. Your twin, down there in that shuttle, still seems frozen in time, then eventually he slowly rises up to the space craft and comes back inside. Although you are now old, you are looking at a young twin!

Another example was introduced by Albert Einstein. Consider two twins, named Biff and Cliff. On their 20th birthday, Biff decides to get in a spaceship and take off into outer space, traveling at nearly the speed of light.

He journeys around the cosmos at this speed for about 5 years, returning to the Earth when he is 25 years old.

Cliff, on the other hand, remains on the Earth. When Biff returns, it turns out that Cliff is 95 years old.

So yes, under certain conditions forward time travel is possible, but not reverse time travel, and certainly if you had a “time machine” then Earth might move away from under you while you are going 30 minutes forward or backward.

An alien invasion by secular and militaristic extraterrestrials would solve one of the biggest problems we have here on Earth. That problem being: does life exist on other planets? Finally we would have an answer!

As you can see from the image, Hubble can barely make out the galaxy, what to speak of any planets that might be orbiting the billions of stars inside that galaxy. The best we can do is study planets in our vicinity of the Milky Way. 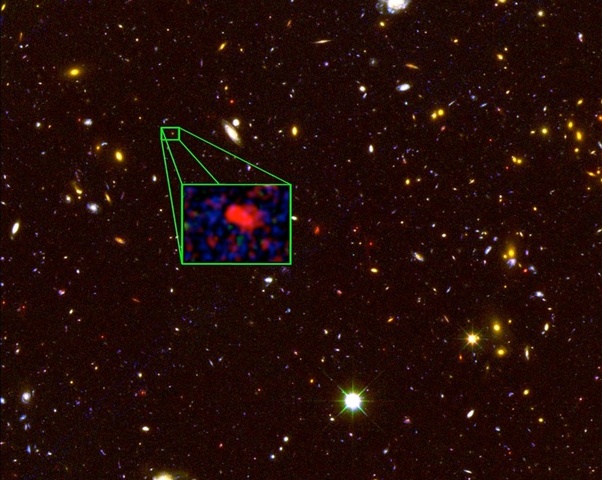